Getting close to the finish line....

My Marie Curie fellowship will end on March 31st, and since I’m in my last lap I’m working really hard to get as many results as possible before it is over. It looks quite good actually. I’m currently writing up a paper about some spectroscopic and electrochemical studies I have done on my proteins, and I have recently obtained some protein crystals of what I hope is protein in complex with DNA (see picture), which will bring my project a lot further if we can get the structure of it. Protein crystals are so beautiful, and I always get a big kick when I see them appear. I also have some more stuff going on, so my hope is to get three papers published based on what I have done during my project. I have learned so many new things here at the ITQB (which is one of the goals of a MC-fellowship), and made many new friends and collaborators, so I’m really happy with my stay and would never have been without it. 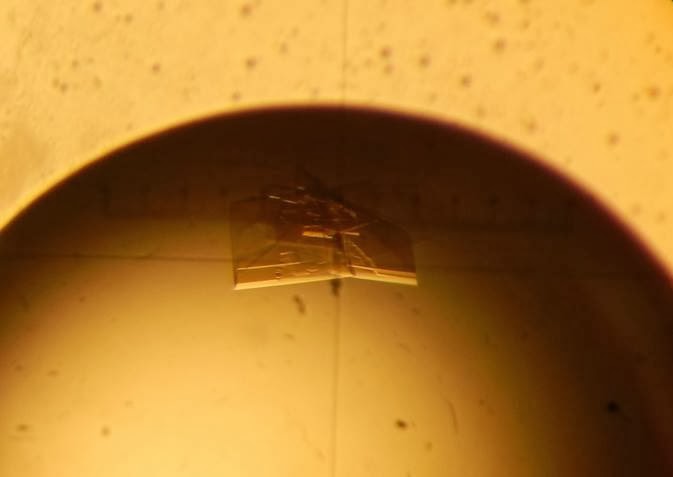 Visit from the University in Tromsø - The Arctic University of Norway

This week I have had visitors from the University of Tromsø (UiT) or UiT The Arctic University of Norway as it is called now, at the ITQB. After the visit to the ITQB I followed the delegation on a small tour of Portugal which aimed to find new partners for Horizon 2020 applications. The tour went from Lisbon to Cantanhede, were we had a meeting with researchers from Biocant, on the following day we met scientists at the department of Biology at the University of Aveiro (http://uaonline.ua.pt/pub/detail.asp?c=35770) and on the third day we visited the University of Porto. After the meetings in Aveiro our host Joaquim Macedo de Sousa took us the cod fish museum in Ilhavo (were we gave the guide a hard time discussing the weight of the biggest cod ever caught by a Portuguese :-), the lovely beaches outside Aveiro and showed us some of the typical houses in Costa Nova just outside Aveiro. And in Porto, our hosts Vitor Vasconselos at CIIMAR and Vice rector Jorge Gonçalves showed us the spectacular future building for the CIIMAR (which will be co-located with the future cruise ship terminal for Porto) in Matosinhos outside Porto. We were very well received in all the places we visited, and common research interest in various fields of marine research were identified, so I'm positive that partnerships will be made for some future Horizon 2020 applications.

Project proposals for the future.....

After a nice holiday here in sunny Portugal, life is all about writing project proposals. I'll submit one to the Research Council of Norway (RCN) on September 4th (BIOTEK2021) and another one to the Portuguese research council (the FCT Investigator Programme) on September 10th. One is based on my recently established collaborations within marine biotechnology here in Portugal (University of Azores and BioCant), the other one to continue my research within DNA repair. It keeps me busy day and night now, but what can you do? My Marie Curie fellowship will be over on March 31st 2014 and I would like to continue with my research somewhere – I just need another grant, and then another one, and then another one, and that’s probably how it’s going to be until the end of my career. It is sad, but true - the conditions for young (in my case - soon middle aged:) scientists in Europe is difficult, and a lot of us will still for many years have to fight about money for a salary in order to continue our search for answers on our hypothesis. Here in Portugal the situation is extremely difficult now because of the economic crisis, and the country has to see many brilliant young scientists leaving to pursue an academic career in other counties. It’s a shame because they have already invested a lot of money in their young scientists through scientific programmes which started about ten years ago, and now they have to see their investment go away. These young people would be important keep here, to help out in the reconstruction of the country when the crisis is over, but when the alternative is unemployment…..
Anyway, I should get going on my proposals again – every minute is precious now J
Have a nice weekend J
Lagt inn av emoe kl. 07:54 Ingen kommentarer:

.... the 6th CERMAX practical course on basic NMR(Nuclear Magnetic Resonance) here at the ITQB. It's a bit heavy for a soft molecular and structural biology brain - its been a while since I read anything about quantum mechanics - but I already feel that it is going to be useful. Perhaps I can determine 3D structures of some of my small proteins which don't want to crystallise! 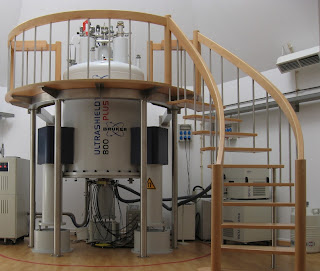 Then I will probably use the Avance II+ - 800 MHz NMR spectrometer which you can see in the picture here (from the CERMAX homepage). It is the highest field operating NMR spectrometer in Portugal and is well suited for structural studies of small to medium size molecules, and especially for determination of 3D structures of proteins in solution.

Since last time I wrote I have had another exam in Portuguese at Faculdade de Ciências Sociais e Humanas da Universidade Nova de Lisboa. It didn’t go very well, but at least I passed J Now I’m finished with level B1, with level B2 coming up (intermediate). The language is difficult to learn, especially when you don’t practise much, and for someone with no experience in Latin/Roman languages (like me), it is even more difficult. Just to give you an example of the complexity, a typical regular verb in Portuguese have 50 different forms, while in French it has only 30!!! However, because of the complexity you don’t have to use a lot of words to express what you want J

When it comes to the science, I have finally received some DNA that I ordered a long time ago, and we have tested it in electrochemistry experiments (cyclic voltammetry). We still don’t have any conclusive results, but we are getting there. I have ordered more DNA, which we will start using next week. On my “to do” list we also find more EPR and Raman spectroscopy experiments J I have also received some knock out mutants from my French collaborators that I will get going next week!
Then, on the following week I’ll take part in a NMR (Nuclear Magnetic Resonance) course (6th CERMAX practical course on basic NMR) which is given here at the ITQB. I look forward to that! Once again, I gain a lot from being in a multidisciplinary research institute.
This week there are two holidays here in Lisbon. On Monday (June 10th) it was Portugal’s national day, and on June 13th it is St. Anthony’s day and Lisbon municipality holiday. On this day, the “lisboetas” celebrate St. Anthony which was a Portuguese Catholic priest and friar of the Franciscan Order. He was canonized on 16 January 1946 and is the saint of finding things or lost people. He is also known as a marriage saint, because there are legends of him reconciling couples. On his feast day (actually the day before, at night on June 12th) he is celebrated with “Marchas Populares” (folk parades) where cultural associations from different neighbourhoods in Lisbon march down Avenida de Liberdade (Lisbons main boulevard) whilst singing and dancing (choreographed) in spectacular colourful outfits, a mass wedding (12 couples get married at the same time in the Sé cathedral – they also take part in the popular march) and street parties in all the traditional districts of Lisbon (e.g. Alfama, Mouraria, Bica and Madragoa) with grilled sardines! So if you want to visit Lisbon at a time with lots of action, I think 12th and 13th of June is a good choice J 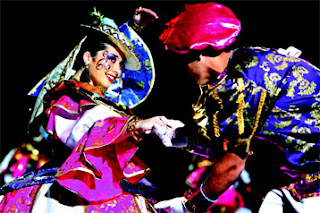 Today I recieved a group of visitors from Innovation Norway (the Tromsø office) and a representative from the Norwegian embassy here at the ITQB. The guests learnt more about the ITQB, IBET and BioCant, and I told them about the emerging marine biotech project that I'm involved in here in Portugal. I was excited and very nervous, but I think it went fine. We finished the visit with a nice lunch at Hotel Praia Mar with an excellent view to the sea and Lisbon :-) Pictures will be posted later!
See news at the ITQB homepage!

Open day at the ITQB

Tomorrow, Saturday April 20th, the doors to the ITQB will be open (dia aberto) for visitors who wants to know more about science and research conducted at our institute. There will be activities for children (experiments) and guided tours to see our facilities. It will also be possible to meet scientists and students at the ITQB and ask whatever question you might have about science and/or about being a scientist. I think this is a very good initiative, and a good opportunity for young people to get to know more about the profession (or rather the lifestyle:) scientist.

I am a research scientist in the field of molecular and structural biology and focus my research on DNA repair proteins. I recently recieved an Intra-European Fellowship for Career Development (IEF) within the Marie Curie programme in FP7 for a two year project at the Instituto de Technologia Quimica e Biologica (ITQB) in Oeiras, Portugal, and the aim of this blog is make short reports about the life as a Marie Curie fellow in order to promote this mobility programme within the European Research Area. However, I will also comment on recent scientific findings which are relevant for my project, and publish other information I find relevant for my research.

Deinococcus radiodurans is a pink/orange pigmented bacterium which was first identified I 1956 in canned meat sterilised by ionising radiation. D. radiodurans exhibits an outstanding resistance to ionising radiation and desiccation and tolerates radiation doses up to 5,000 Grays (Gy) without loss of viability. Most other organisms cannot survive doses above 50 Gy. I am studying the role of the Base Excision Repair (BER) pathway for the extreme resistances of this organism.